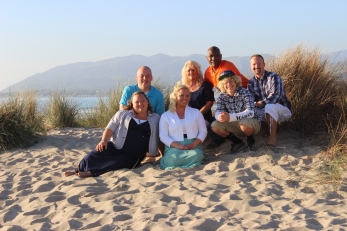 Last month my life literally revolved around the ocean. I had the opportunity to spend time in Southern California with my family and I have to admit that I became addicted to the ocean! The fact that they live five houses down the lane from the sand certainly helped with the addiction!

The smells, the sounds, the waves, the sand, the shells, the rocks, the birds, the sunrises, the sunsets, the clouds, the dogs, the people…but mostly the overall creation that God Himself has made for us to enjoy…a true gift from God. Everywhere I looked there was another one of God’s creations. How many of you have actually enjoyed this gift of the ocean from God? How many gifts from God do we just shrug off on a daily basis because we are so busy ‘living life’? How many living, breathing, walking gifts from God have we just ‘set aside’ because we don’t have time to spend with them right now? Have you lost a gift from God and can never replace it? Do you long to get that gift back? My gift of Jacqueline Lewis, my friend and mentor, was revived again as I challenged myself on a jetty one morning…to face the pain of taking her friendship and mentorship for granted. Jackie was a gift from God that seems lost forever…but something happened one day…God returned that ‘gift’ back to me.

I spent at least 2-3 hours at the beach almost every day. 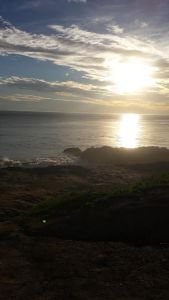 Walking: Some days I walked up to two hours along the shoreline, up and down the lanes, through the parks that connected along the oceanside…and almost everyday I would catch a glimpse of someone who resembled Jackie. 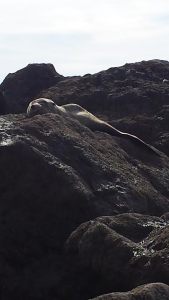 Talking: I made many new friends, not just human…this seal was ‘talking’ to us in a harsh way as we ‘interrupted’ her rest on the jetty, soaking up the sun, until she had the strength to get back out there and challenge the harsh surf that she had rode in on earlier that day. And the dogs…they were everywhere, making it hard for me as I dealt with the separation from our dog Lexi. I had never been away from her for that long and I wondered what she was thinking…had I died, had I abandoned her forever? Because of the dogs…I would constantly recall Jackies ‘love’ for dogs…and pigs. (Inside joke)

Reading: I read. Although it was so hard most days because the sound of the waves would pull you into the ocean as they crashed hard…sounding like thunder. However, many books did get read in those four weeks! And I recalled that Jackie always asked me what books I was reading and in the time we did mentor she never suggested any books…she said I was ‘on point’ with my reading and it showed. (That always made me smile) 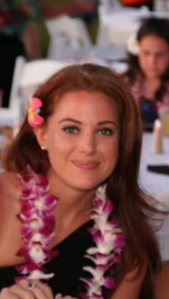 Catching some sun: I definitely changed my skintone a couple shades of tan while visiting with the sun daily. My Vitamin D level should be good for another month now! And yes mom, I used sunscreen protection! And yes…the sun filled me with the same warmth that Jackie’s smile did! She would smile, say ‘hey girl’ and give me a hug…it was that kind of warmth…the kind that warms your heart from the inside out. 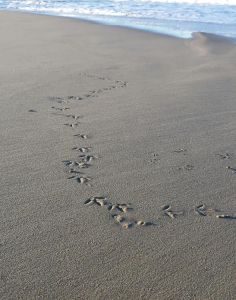 Watching the birds: Many of the birds were so small, yet the power of the waves as it hit the shoreline seemed so hard and you would think it would just knock them over…but they just scurried along and played tag with the water and the foam as it rushed them inland. Their ‘footprints in the sand’ reminded me that God also gives them the strength to win the game against the ocean. It reminded me of Jackie and her small stature….but mighty from stage because God gave her the strength to speak on the challenging topics that were sometimes hard to talk about…he gave her the transparency to connect with thousands…and that she did! 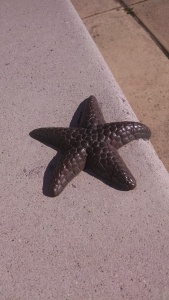 Picking up shells/rocks: Each rock had its own story of how the sea whirled it from shore to shore and landed it at my feet as if it had just been freshly polished. Each shell was covered in sand and boasted stripes and colors only the sea and God could create. It reminded me of one of Jackie’s favorite stories about the starfish and how she made the difference to the ONE starfish she just threw back to the sea…Jackie made a difference to this ‘starfish’ too. 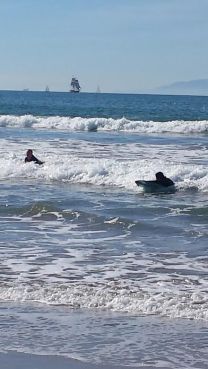 Watching my family: I spent many days watching my grandson and my grown children, challenge the strength of the ocean as the waves pounded them into the water and sand while they tried to get that perfect ride into shore. They would go back for more! It made me long for the days to stop right there. For them to never lose the sense of how it felt to play in the water, to challenge the waves, to let the waves crash them into the water as if they were a rag, and to have that sense of trust that God will not let them get lost in the power of the ocean. (We only had one ‘casualty’…Kevin’s phone, easily replaced) I know Jackie knew how it felt to watch her family play hard and cuddle even harder, as she spent many days just cuddling with them and loving on them and teaching them to love hard and play hard…for we never know when those days will be gone. But the same protection that kept my family safe in the ocean is keeping Jackie’s children safe and protected from the waves of life as they face them without their mom. 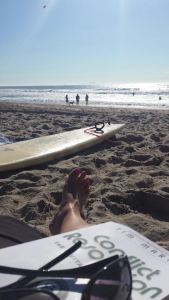 Feeling the water and the sand between my toes: Wow! All I can say is it was exhilarating and soft and warm and cold…and it summoned you back daily to take off your shoes and feel Gods creation with your soul. I know Jackie loved the sun and the water and the ocean and the sand…because she always sent pictures just like this to prove it! (Baaahaaaahaaaa) 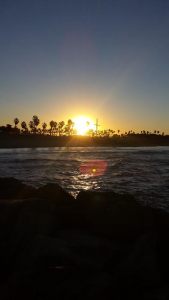 Watching the sunrise: I only woke once to watch the sunrises…my husband is a better ‘morning person’ than me. He rose everyday and spent that special time with God. The Sabbath morning I awoke with my husband and we watched the sunrise amongst the marina…and the masts of the ships formed a cross in the rising Son/sun…I knew God was with us. It was a special time for both of us. And the cross represented the sacrifice that God made for us…and for Jackie…so that we could spend eternity with Him. 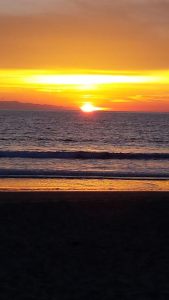 Watching the sunset: The sunset to me was breathtaking! It appeared so similar in the many, many sunset pictures I posted continuously throughout our trip…but the naked eye verses the camera was no comparison. None! The gathering of each lane of residents as they walked slowly to the shore, every night to chat and watch the sunset yet again…another day gone to rest. Thinking that my dear friend could see Gods greatness right along with me warmed my soul. 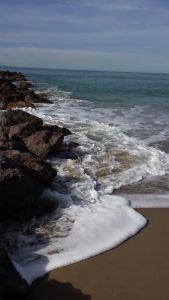 But the most impact came from the time I just sat on this jetty and meditated on God’s greatness and gifts. I have never felt as close to God as I did during those times. Most times it was just silent in my heart as the waves around me crashed, the birds sang, the dogs barked and played in the water, the people laughed, and the children giggled and splashed in the cold winter waves.

And then one day I decided I would listen to the song that played during the tribute to Jackie and her video of memories…Somewhere Over the Rainbow/Israel Kamakawiwo’Ole. It was then that God brought back that gift of Jackie. As the tears rolled down my face and I looked deep into the ocean I heard her voice… “Girl…Please live out my dream”. I know that Jackie loved California and I know she would have loved to live there at some point in her life…Our dream is to live in California and we will live there someday soon. The ocean waved goodbye to me that day…and so did all the hurt and pain I had felt from losing Jackie. I will see the ocean again one day very soon. And one day I will see Jackie too.

Until that day I will cherish the gifts that God has given me…my salvation, my husband, my family, the ocean, the sun, the smells, the sounds, the waves, the sand, the shells, the rocks, the birds, the sunrises, the sunsets, the clouds, the dogs, the people, LIFE LEADERSHIP and the wonderful leadership of some amazing people…and the precious gift of my friend and mentor, Jacqueline Lewis…may you rest in peace until we meet again…somewhere over the rainbow!

This ones for you Jackie……..